Matar Publishing House was founded in 1985 by the late Moshe Trivaks and his nephews Yitzhak and Bini Trivaks. Its founders saw it, then as now, as yet another link in the long-standing family tradition of  publishing and distributing books, a tradition that began in the 1920s by the late Yitzhak Trivaks, a journalist and a writer in Poland and Palestine. Itzhak's son, the late Gavriel Trivaks, was the first distributor of the Hebrew Encyclopedia in the 1950s in Israel. Matar Publishing (Hebrew abbreviation of 'Trivaks family') is a natural continuation of their activities. From the outset, Matar has set itself the goal of publishing popular high-quality titles and over the years over 1500 titles were published, many of which have achieved great success.

The late Moshe Trivaks, one of the founders of Matar, was a journalist, a pioneer in the public relations industry in Israel, a scholar and a cultural figure. He was a significant pillar in the Matar and focused on developing international relations with literary agencies, publishers, and bringing innovative and groundbreaking manuscripts to the Israeli reader. He helped to establish Matar as one of the leading publishing companies in Israel

Matar Publishing was the first in Israel to recognize the importance of business and management guides as well as self-help literature, whose popularity has skyrocketed in the last two decades. Over the years Matar has published hundreds of these books including bestsellers such as The Blue Ocean Strategy, Rich Dad Poor Dad series, The Harvard Business Review Manager`s Handbook, What Got you Here Won't Get You There, and books by business and management giants Warren Buffett, Jeff Bezos, Eric Schmidt, Richard Branson, Elon Musk, and more. In the field of motivation, leadership and empowerment Matar published Rudolf Giuliani's Leadership, Emotional Intelligence, Who Moved My Cheese, The Last Lecture, Happier, Now: Discover Your Strengths, Quiet: The Power of Introverts, Grit, Lean In: Women Work, and the Will to Lead, and The Moment of Lift: How Empowering Women Changes the World.

In the field of non-fiction, a number of books have been published that have become classics; The elegant universe, World Changers series (Women who changed the world, Speeches that changed the world, etc.), Predictably Irrational: The hidden forces that shape our decisions, Thinking - Fast and Slow, Startup Nation, Nudge, How to Prevent Fallacies in Decision Making, Far from the Tree, and Daniel Fink books (When?, Drive, To Sell is Human) .

Another area in which Matar has been very successful is parenting manuals, nutrition and health books. Matar publishes titles that have become leaders in the field of nutrition such as The 17 Day Diet, Fit For Life, Main Course, lean forever, Eating Bread And Getting Slim, and Dr. Atkins' diet books. In the field of parenting books, Matar has published the Baby Whisperer series, Pregnancy: The Ultimate Week-by-Week Pregnancy Guide, The First Year Book - your guide to pregnancy and childbirth, From Birth to One Year of Age, and Paternal Intelligence.

In recent years, Matar published quality books for toddlers and children, and has taken its place as a leading publisher in this genre with book series such as: Lulu, Dear Dumb Diary, Clementine, My Book of Emotions, Good to Know, Melody, and Paco. Among others, Matar published the original children books: Gilli's Treasures, Rosalinda, One last story, Oh Brother, The Kingdom of Serious and The Kingdom of Silly,Goodnight Child, and other books that went into the recommended book lists in schoolsת the 'Pajama Library project', and received the standard marks from the Adler Institute, great recommendations and reviews.

In the Fiction department, Matar published The Red Tent, The Kite runner, A Thousand Splendid Suns, The Mountains Echoed, The Five People You Meet in Heaven, I have no idea how she does it, The Narrow Road to the Deep North (winner of the Man Booker Prize) , We Were the Lucky Ones
A Gentleman in Moscow, and The Year of Magical Thinking. A number of quality titles have been published in Matar by Hebrew writers: Travels With Vera, and Four O’clock In The Afternoon that won the Sapir prize for debut Literature, and Atida that won the Brenner Prize for deubt Literature

Matar, which publishes tens of titles each year, has aimed from its inception to be a trailblazer, always aspiring to remain fresh and exciting, and to bring to the Israeli reader the best of the literature the world has to offer in a wide variety of subjects. 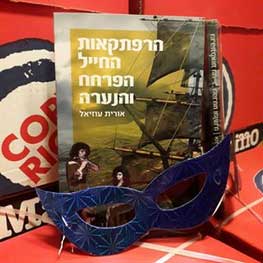